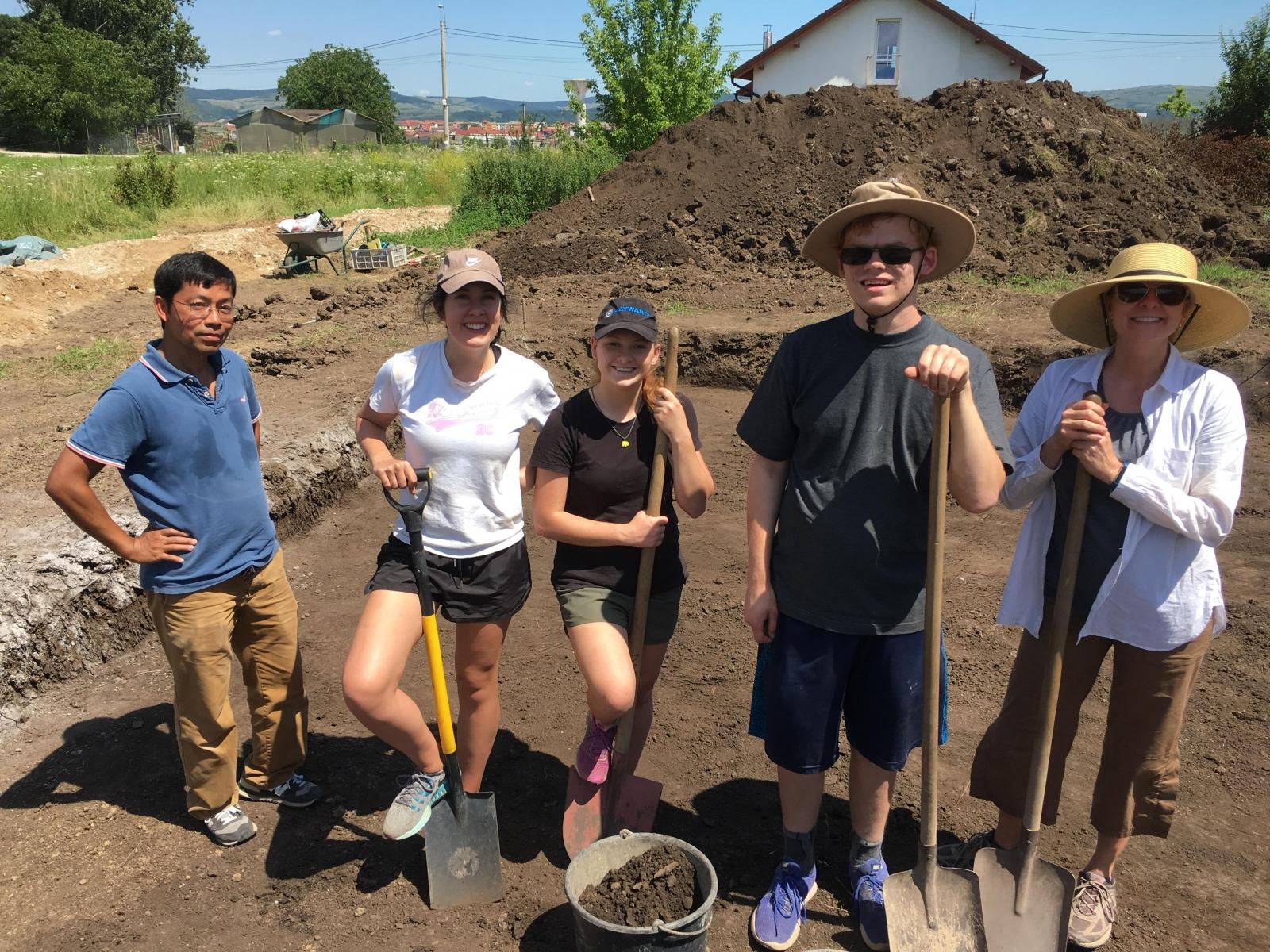 It all started with a skeleton key that I found on my grandparents’ farm in Texas. I was about 11 years old on that summer day when something caught my eye and I dug buried treasure out of the dirt with my bare hands. The key was about three inches long and rusted from neglect. Immediately, a number of questions came to mind: What door did it open? How old is it? Who lost it? I presented the key to my grandmother and she said, “Go on and keep it, honey. It’s yours.” I felt like I’d won the lottery!

Finding that key was the beginning of my passion for archaeology, a field of study that I did not ultimately pursue as a career, but one that has long sparked my interest. Archaeology is the study of human activity in the past, primarily through the recovery and analysis of artefacts. During my project in Alba Iulia, Romania, I got the chance to experience the day-to-day work and excitement of being an archaeologist.

After arriving at the airport in Bucharest, I was taken to stay overnight with a host family in Brasov. It was a Sunday, so I had the day to meet other volunteers and explore this historic city. I enjoyed this time to get my bearings and acclimate to the time change, food, and schedule. On Monday morning, I signed paperwork and stepped onto a bus for the four-hour ride to Alba Iulia in the Transylvania region. There, I met my Project Coordinator, Diana, and the other volunteers: two other Americans and two Australians.

Archaeologists in Alba date artefacts from this area approximately 6,500 before present time, known as the Prehistoric Neolithic period. The site of our dig was a residential area where past excavations yielded mass graves - more than 100 skeletons in total. There is a law that before anyone can build on their property, an excavation has to be completed or the property owner cannot install electricity or water in their home.

To start, the area was outlined to create two trenches about 40 feet by 30 feet. A bulldozer scooped out about two feet of dirt and our first job was to take shovels and scrape away the white outline, then we started work on the profile. The profile is what archaeologists call the walls of the trench. The walls have to be straightened and smoothed so the layers of dirt can be observed. This is called stratigraphy and it’s how they assign approximate dates to the items that are found.

It literally took eight of us (volunteers, archaeologists and a Romanian archaeology student) working three days to get the site ready for excavation. We sometimes found bits of pottery or animal bone that we set aside, but mostly it was clean dirt.

Once the site was prepped, we started excavating. In two groups, we worked in one trench where a small section was roped off. Archaeologists dig a layer at a time until they find the yellow soil which is the original soil. One layer is about 12 inches of dirt.

Each team had three jobs: Shave off a three-inch section of dirt with a spade using the length of the spade for depth, shovel the dirt into a bucket and lift to the surface, dump the buckets into a wheelbarrow and then dump the wheelbarrow in a pile away from the trenches. At the same time, we kept an eye out for anything of interest, for example I found the handle to a clay jar. We watched for flat surfaces, sharp edges, orange clay, etc. Often, we wiped the dirt off of a “find” only to see it was just a rock.

During my turn at the wheelbarrow, and while I waited for another bucket to be dumped, I combed through the dirt to make sure we didn’t miss anything. Sometimes I found a piece of clay or a small bone fragment. Suddenly, something else caught my eye. It wasn’t flat or orange or sharp. It was a human tooth, a molar with roots attached. After days of picking up pottery shards, this was a real find! The archaeologists were super happy and said that the last time they found a mass grave, their first find was a tooth. The next day, someone found a skull and things got really exciting!

So what happens to all these shards and bones that are found? Because this dig was supervised by the local university, the pieces are tagged and bagged and stored in the archaeology department. Human remains are sent to the “Bone Room.”

On rainy days, we went to the ceramics lab to “wash dishes.” Using only lukewarm water and a small brush, we scrubbed the dirt off of artefacts and laid the pieces out to dry. One of the bags I worked on was from the excavation for a highway construction in 2012. It had pottery pieces of all sizes, animal bones, and even an animal jaw with teeth still attached. There are literally not enough volunteers to catch up on this work. Some of these bags go back 10 or more years. In the ceramics lab, some very patient person has the job to recreate the pottery from the broken shards. Can you even imagine? It’s like putting together a 3D puzzle without a picture or all the pieces.

We also visited “Anna the Anthropologist” in the university’s Bone Room to learn more about what happens to the human remains that are excavated - like the tooth that I found. Remember the mass graves I mentioned? Anna is now working to put the skulls back together and she taught us how she can determine the age and sex of the person from his or her skull. It was really interesting.

I had one full weekend to spend as a tourist in Romania, so the volunteers and I took some time to explore. We visited medieval Bran Castle, built in the 1300s, which inspired the Dracula legends and was one home of the King and Queen of Romania. Bran was a great place to pick up souvenirs as you have to walk through a street fair full of vendors to get to the castle. We also saw Rasnov Citadel, Sibiu, and Brasov once more.

Romania is a developing country with a deep history, beautiful landscape and kind people - except for taxi drivers who will scam you just like anywhere else in the world. I met some lovely people who were also volunteers from around the world. I’m so grateful for this opportunity to learn about the field of archaeology and the country and culture of Romania. Working in the hot sun taught me that I definitely want to keep my day job, although I do have some mad shovelling skills now, so there’s that. 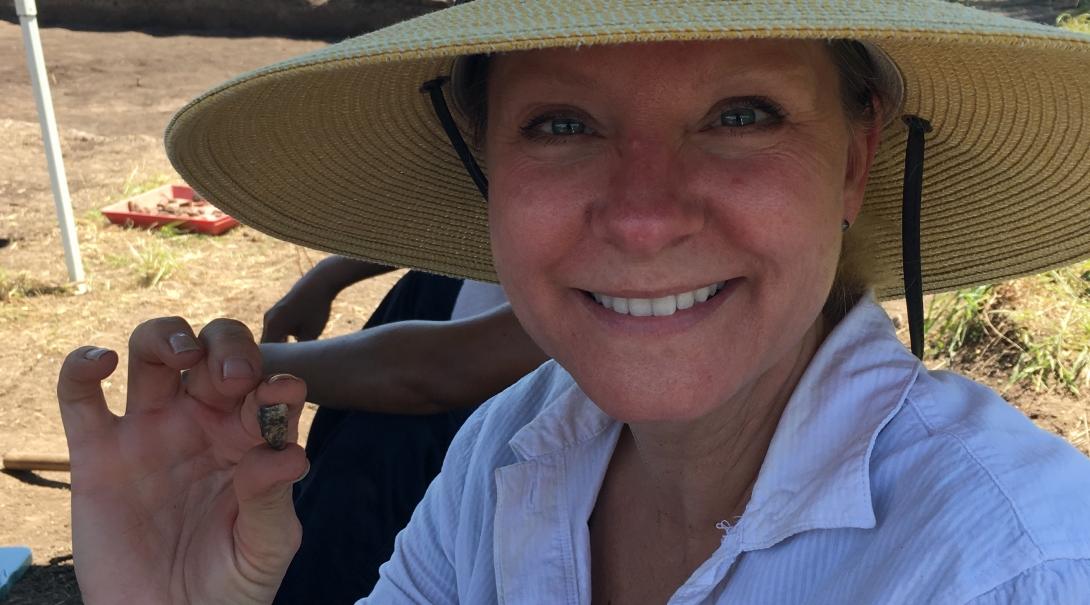