I decided to volunteer abroad, as I wanted to do something meaningful in my three-month summer holiday after finishing my GCSEs. After looking at many different companies, I decided to use Projects Abroad. They clearly had the most well established programme for 16 to 19 year olds, which really made my parents feel more comfortable with me going. Choosing them also meant that I had more choice over which project I did, due to the vast amount of programmes available.

Once I had applied and was confirmed on the Physiotherapy Project, I received my log in details for My Projects Abroad. This website contains virtually everything you need to know about your whole trip, from visa information to packing lists, and even a cultural course to learn about the country before you leave. Around a month before we left, our itineraries, accommodation, and placement details were posted. In addition to this website, there is also a Facebook group specifically for people doing projects in Nepal, which was really useful for finding people taking the same flights as me and doing the same project.

As I booked my flights through Projects Abroad, I travelled from Heathrow to Kathmandu with other volunteers who were on other High School Special programmes. This really made the whole experience less daunting, as it meant I didn't have to navigate Muscat Airport alone (which wasn't particularly difficult, but would have definitely been overwhelming without the other volunteers, as I'd never flown without my parents before).

Once we got to Kathmandu, one of the volunteers on my flight bought his visa at the airport, which was really simple to do and he even got through immigration quicker than I did, as the line was shorter. After we collected our bags, we went outside. The Projects Abroad staff immediately knew who we were and took us to the van.

The journey to International Guest House was around 30 minutes and was probably the scariest journey of my life, but the driver was calm and really made us feel safe. When we arrived, we had time to relax before dinner, where we got a chance to meet the people on our project and the people on the Medicine Project who we would spend the next two weeks with.

We spent one night in Kathmandu before we left at 6am for the 10-hour drive to Bharatpur in Chitwan. Although this journey was long (and I'd definitely recommend bringing a portable speaker), there's no better way to become comfortable with people than falling asleep on them!

At my first placement, I was at ABBS, which is a day-care centre for disabled children. We mainly spent our time playing with the children, but the women working there were more than happy to discuss the children's disabilities with us and they allowed us to observe the physiotherapy they were doing. This placement was quite shocking, as there were so many children being looked after by just three women. The women coped very well under the circumstances, even when the power turned off for a few hours.

We also had placements at two hospitals, CMC and Spinal. Out of these two, CMC has to be my favourite as there were more patients and we were able to assist the physiotherapists as they delivered their treatments. In the afternoon at this placement, we were also allowed to choose a ward to go to, which was really eye opening as it allowed me to fully see the differences in the healthcare system there.

On one day, we got the chance to do a dental outreach at a school. We spent around an hour the day before planning and producing resources for our lesson with the kids. When we arrived at the school and were standing in front of 30 six year olds who weren't fluent in English, it was quite scary, but when we discovered they had quite a good grasp of English and were very eager to learn, the lesson went along with ease.

There were a lot of organised activities that allowed us to learn more about the medical field as a whole. Our anatomy lecture at Chitwan Medical College was the most interesting, as we got the chance to see bodies that had been donated to science. We also learnt about some of the medical issues common in Nepal. We had the chance to visit the Natural Hospital, where we learnt about the practice of detoxing and meditation to prevent and cure many diseases. Finally, on some evenings, lectures were organised about things such as surgical procedures.

On the Friday and Saturday, we visited the National Park. When we arrived at the hotel, we dumped our overnight bags in the rooms and quickly left to go ride on an ox pulled cart. This was such a fun experience. The cart took us to a museum, where we learnt about the effect of the area becoming a national park on the local farmers. After that, we had a chance to relax in the boiling heat, before going on a jeep safari.

We were very unlucky on our jungle tour, as we didn't get to see the rhinos there, but we did get to see some monkeys, spotted back deer, and a bore. That evening, we went to a cultural show where we got the chance to go up and dance with the locals, which was a lot of fun. The next day, we spent time at the hotel in the morning, before returning to Bharatpur to have henna done and enjoy a movie night. We also got to do some leisure activities during the week, such as visiting temples, doing yoga, having dance lessons, shopping for souvenirs, and even having a birthday party for one of my friends.

My accommodation and food

For the majority of our trip, we stayed in Hotel Global. Although our rooms there were quite basic, they did have air conditioning (a bit temperamental, but the staff fixed it quickly) and we sometimes had access to Wi-Fi. The hotel also had a pool, which was quite nice, and a gym.

I left for Nepal not really enjoying rice, but I returned craving it for every meal after spending two weeks eating it every day. Most days, the hotel served up nice vegetarian and meat options and although sometimes we didn't particularly like what was on the buffet, we either survived on rice and naan or ordered room service.

The Projects Abroad staff were more than helpful from the moment I decided to attend an information event. Our coordinator in Nepal was so supportive and helped us with whatever we needed. She really made the experience better, as she made sure everything ran smoothly for us. She even changed our itinerary so we could go souvenir shopping in Kathmandu, despite the fact that our bus there was delayed due to landslides.

My decision to go to Nepal was definitely the best decision of my life. The things I saw whilst there were eye opening and have made so much more of an impact on me than just seeing photos and hearing stories on the news.

The feeling of volunteering and getting to see the faces of the children you're teaching or playing with is such a fulfilling thing. I've never felt a purpose like that before. In addition to this, the friends I made on the trip are truly amazing and I never would have had the chance to meet them if it wasn’t for Projects Abroad. I am really looking forward to returning to Nepal and I am looking forward to volunteering in Peru next year! 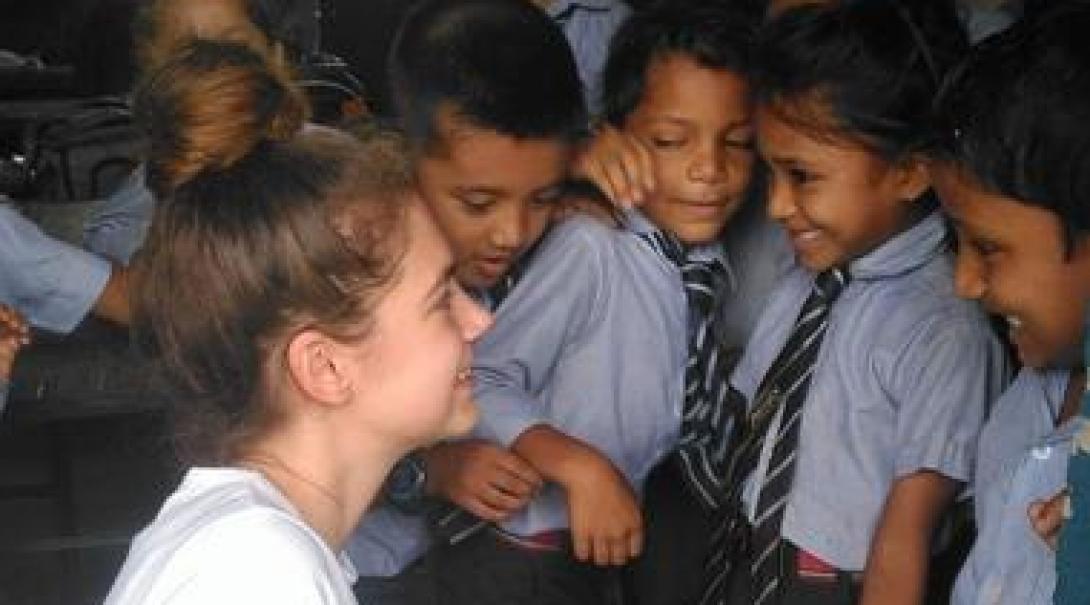