Here at Projects Abroad we love to share the stories of our volunteers. Read below to see part three of Sara's year long adventure. Or if you've missed it, check out part one here. She travelled with Projects Abroad for almost an entire year in 2019 and 2020. Sara joined a variety of projects in Mexico, Peru, Sri Lanka, Thailand and Cambodia! 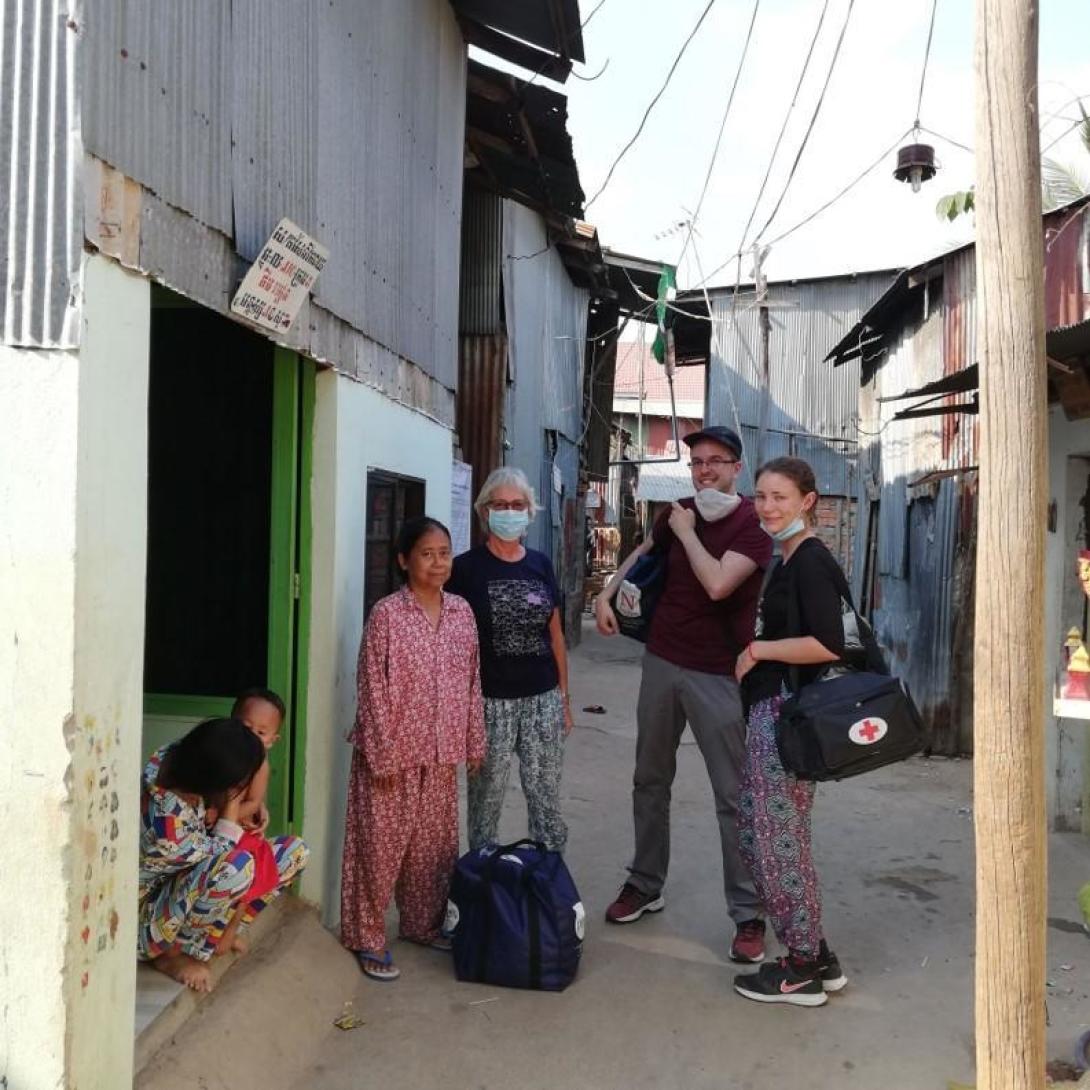 Despite having travelled halfway around the world with Projects Abroad, arriving in Phnom Penh was a shock, but I was now getting ready to start my fifth consecutive project with them; perhaps I was getting tired, tired of being the new person, adapting to new surroundings and learning what the projects required of me. I also arrived without any clear idea of the history Cambodia had endured, the effect that toll still takes and the effect it took on me personally. I had chosen a Project that would take me into the heart of the local population and an area in which I had little previous knowledge.

We were staying in a private apartment block consisting of 15 rooms with two or three beds and an ensuite shower in each. I was introduced to a lively, enthusiastic group of young people and given a rough timetable of what to expect from my Project.

Before we began we were encouraged to watch – “The Killing Fields” a film dramatising the Khmer Rouge regime in the 1970’s, it is based on the experiences of two journalists: one Cambodian and the other American. It is necessary viewing but not pleasant. We all needed to visit Choeung Ek Genocidal Centre, as well as S21, one of the Khmer Rouge prisons that is now a museum. To say this was a rude awakening to the horrors the Cambodian people endured, is a bit of an under-statement.  For me coming from two months on a conservation dive site in Thailand to a city crammed with poor housing, chaotic traffic and so much plastic rubbish littering the streets, the shock was profound.

However, putting my qualms aside, I joined the Public Health Programme. It aims to provide preventative health checks for adults and basic hygiene for nursery children.

It helps firstly by providing a free service and then highlighting any likely illness. Healthcare is very expensive, so the patients requiring further medical advice can attend a local GP, or hospital, knowing that their symptoms actually require treatment. Most people at these clinics suffer with their weight, many have high blood pressure and are pre-diabetic. Their diet does not help them and many are mal-nourished. 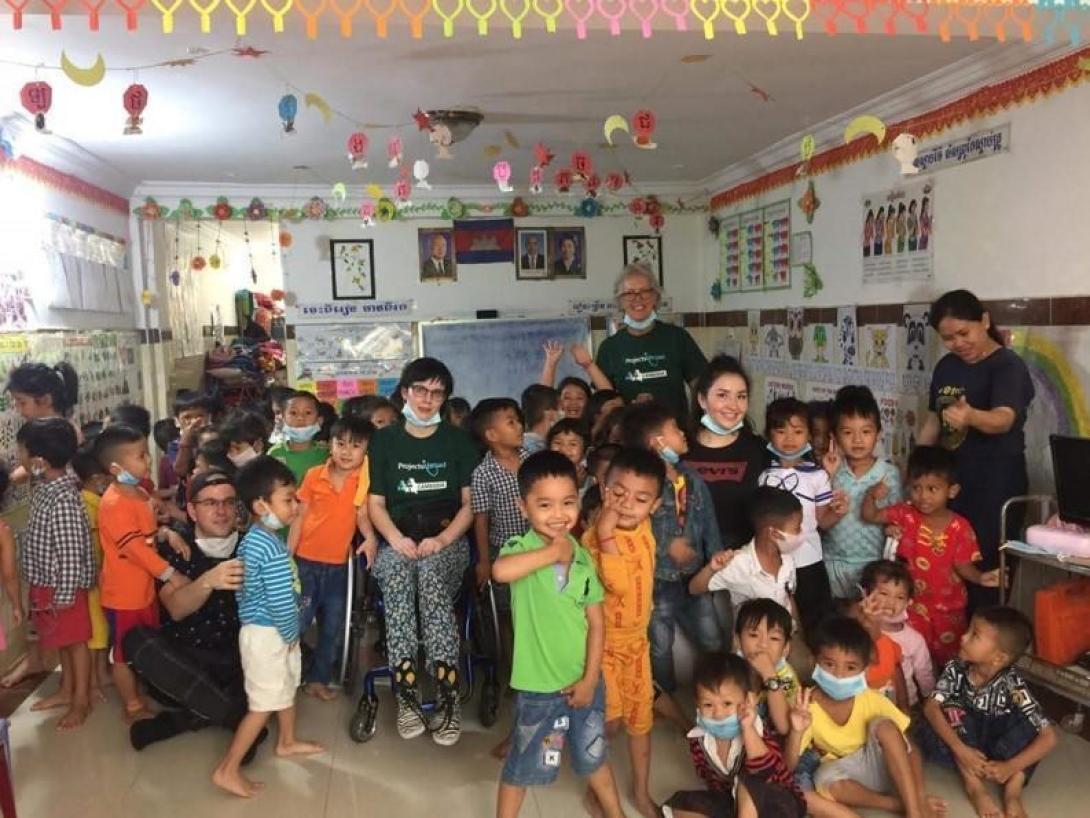 We accompanied a local doctor who consulted with each patient and then the volunteers took blood pressure readings, blood sugar tests, the height and weight of each person. We gave vitamins to most people and strictly counted pharmaceutical tablets to ensure each patient only had enough medicine for themselves and therefore would be unlikely to share or sell them to anyone else. We provided six districts with this service, visiting each clinic on a monthly rota. For the most part clinics were conducted from a private house, with the home owner promoting the clinic day and obviously opening their room for our use.

Their houses are small and quite basic,  but very clean and extremely well organised. Tiled floors, separate kitchen and shower, main living/sleeping room and usually a huge television. Some of the bigger rooms had stairs to a mezzanine floor, particularly when grandparents, parents and children shared the same space. The houses are built very close together, creating shade and encouraging cooling airflow through the lanes. 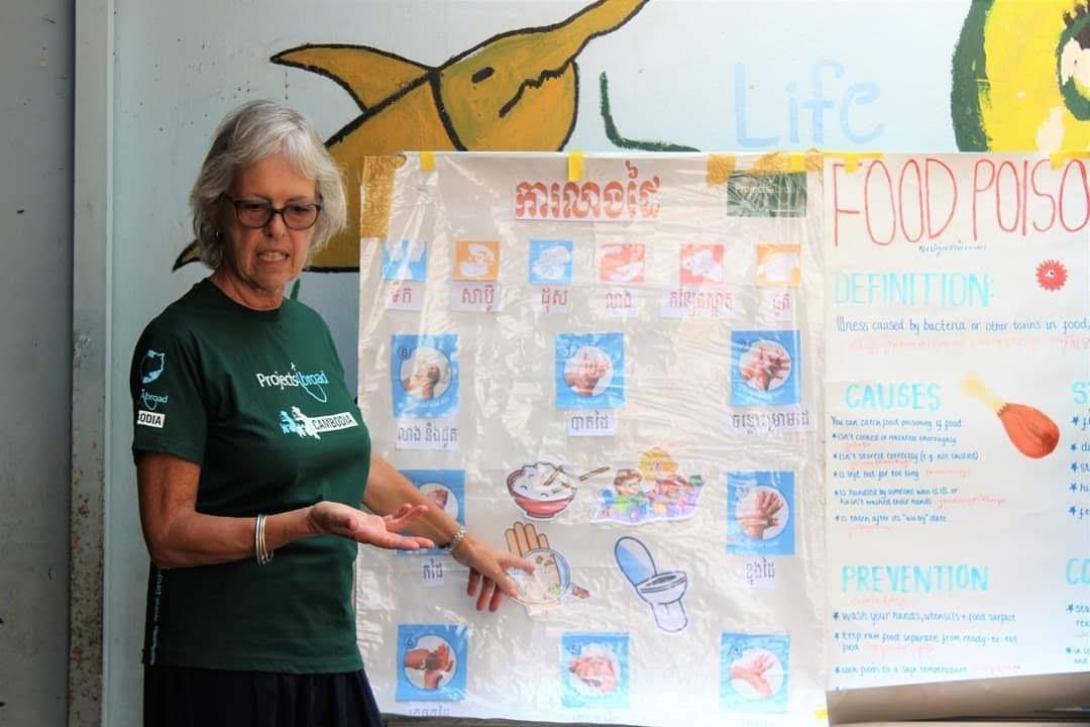 Most of the districts we visited were in Phnom Penh itself but others are further out into the countryside, only one of which I attended. Silk Island is quite a long journey by tuktuk and ferry, so we combined our visit to the children’s nurseries on the same day.

In the morning we would check the children’s teeth and ears, and cut their finger and toe nails, giving them each a vitamin C tablet as a “reward”. The state of these young children’s mouths was appalling, some teeth black with decay, mouth ulcers and so many of them had toothache. We were able to sooth the ulcers with tooth gel and provide toothbrushes and paste for their use, but the real problem was their poor diet and too much sugar.

The children were delightful, eager to please, so polite and incredibly well behaved. They would sit patiently waiting their turn to be seen and smile happily, even when describing their pain, then presenting their tiny little nails to cut, with such trust.

Other days we went into schools where we had to give short healthcare lectures. Covid19 was beginning to be reported in the News, so we emphasised the importance of personal hygiene, particularly hand washing when preparing food.  Many of the children either helped prepare meals with their families or worked on the roadside stalls selling street food. Any knowledge we could provide to prevent food poisoning or virus transmission could only help.

I suppose like any developing country, Cambodia is a land of contrast. Having spent six months of my travels on conservation projects to actually see the devastation plastic waste has on the environment is heart-stopping. Most rubbish in the countryside is burned but plastic cannot be added to the household fire so it is dumped any and everywhere. 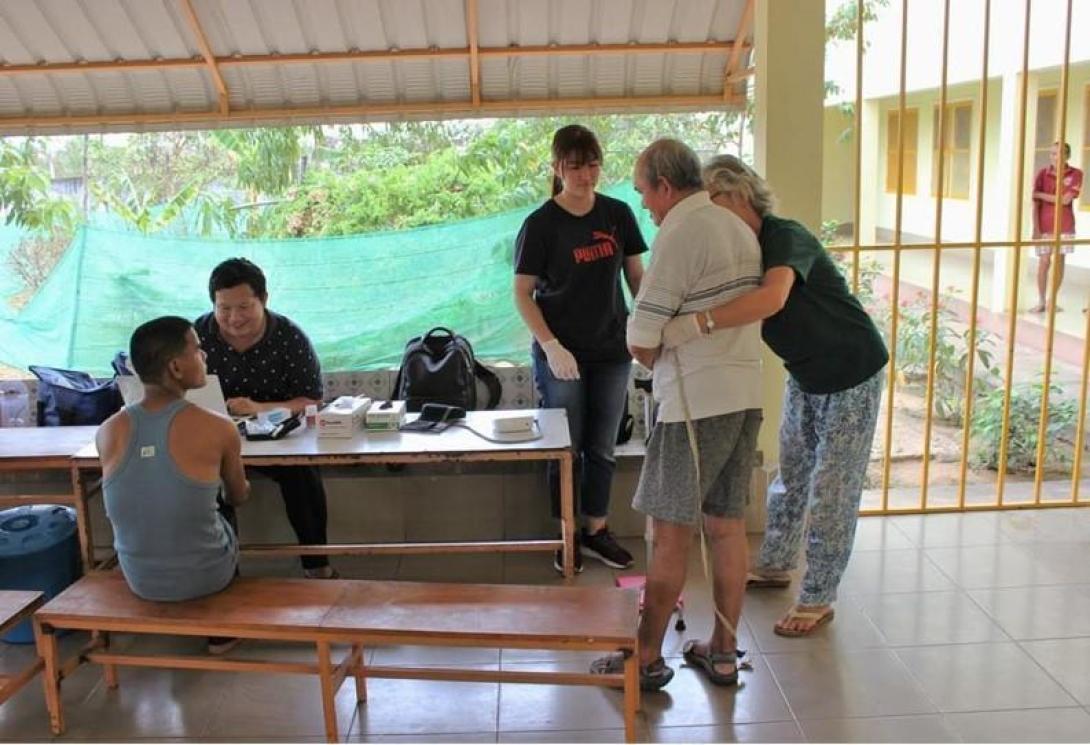 For me the most difficult and harrowing visit was a day at a rehabilitation centre. The residents are physically and mentally disabled requiring constant attention. There is little provision for people unable to care for themselves, so the men were extremely lucky to have a home here.

I think for Europeans and Americans it is extremely difficult to comprehend the extent poverty and disability wreaks on a community. These people literally have to live on their wits and create the best life for themselves that is possible. If one of their own is incapable,  tough decisions have to be made. Their Buddhist tenet allows a serenity and acceptance of life as it is.

Going from one area of town to another, the contrast is marked, tourist hotels, shopping malls, well kept Temples, beautiful museums and galleries, a few streets away, rubbish piled high, tiny, basic homes, little work and certainly no Government hand-outs – really a city of contrasts.

I saw one little lady sleeping in a hammock attached to the railings on a wall; earlier that day she had been manning her shop – items laid out on the same hammock adorning the pavement. It actually made me smile, what resourcefulness! 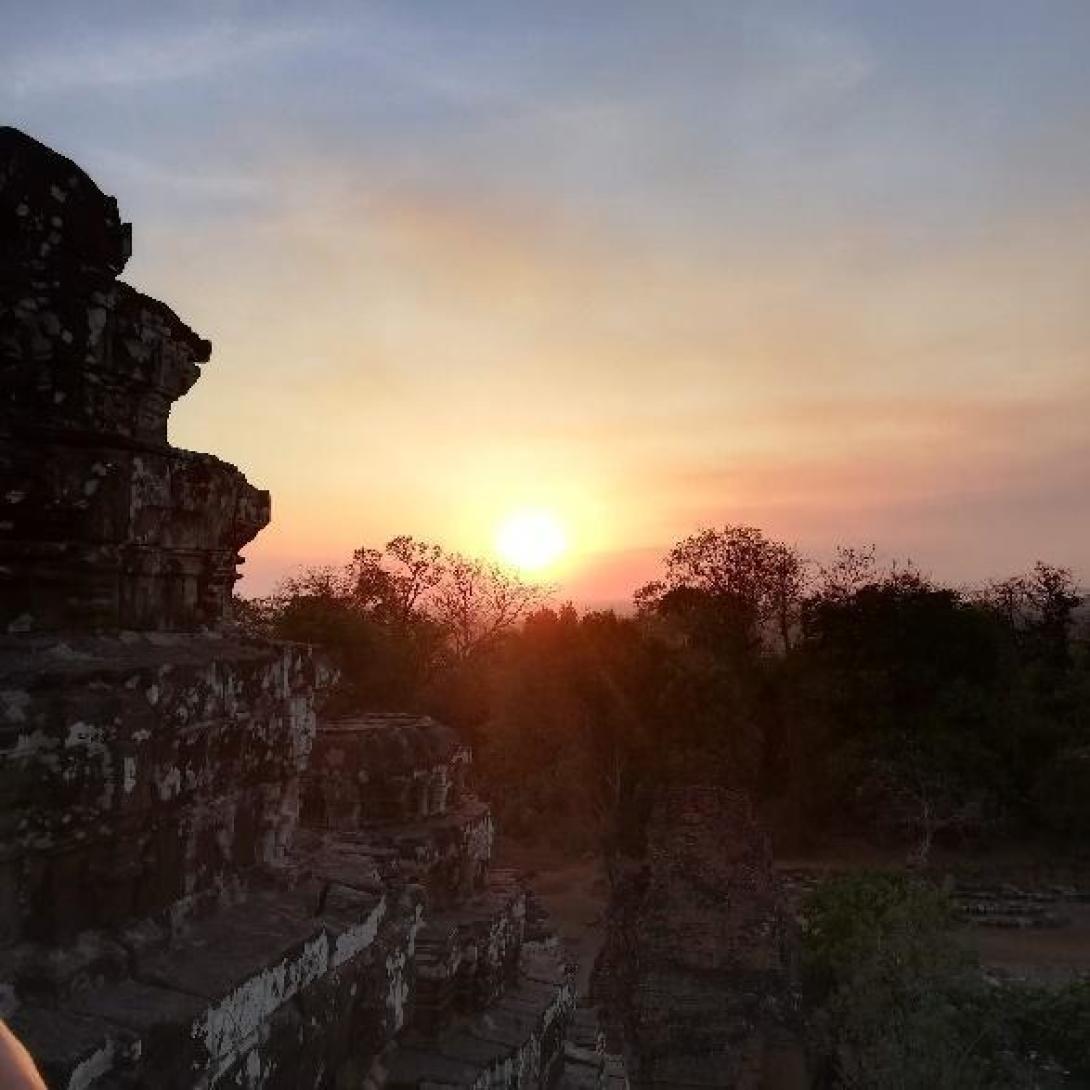 I was a little concerned about what I would encounter when I left the city. A few of us had decided on a little RnR and take the weekend to visit the Angkor Wat temples; one of the seven ancient wonders of the world, situated near Siem Reap. We hired a minibus between the four of us, cheaper and easier than trying to navigate the public bus system. We drove out of the city and passed acres of flat arable land, chickens with their chicks pecking at the side of the road as many small motorbikes piled high with people and goods buzzed by.  It was a long but lovely journey and we eventually arrived at our hotel in the dark for a 4.00am pick up the next morning.

We waited in line to buy our passes for the temples and found our way to a suitable sunrise viewing spot. There were hundreds of people all sitting in a stunned hush in front of a small, rather dry lake, waiting. It was like being part of an ancient ritual, would the Sun God actually grace us with his presence? The relief when the sky began to lighten was palpable, then a mad scramble for cameras and Instagram-able poses somewhat spoiled the effect!

In the evening we took a mountain path to a temple ruin at the top to view the sun setting. 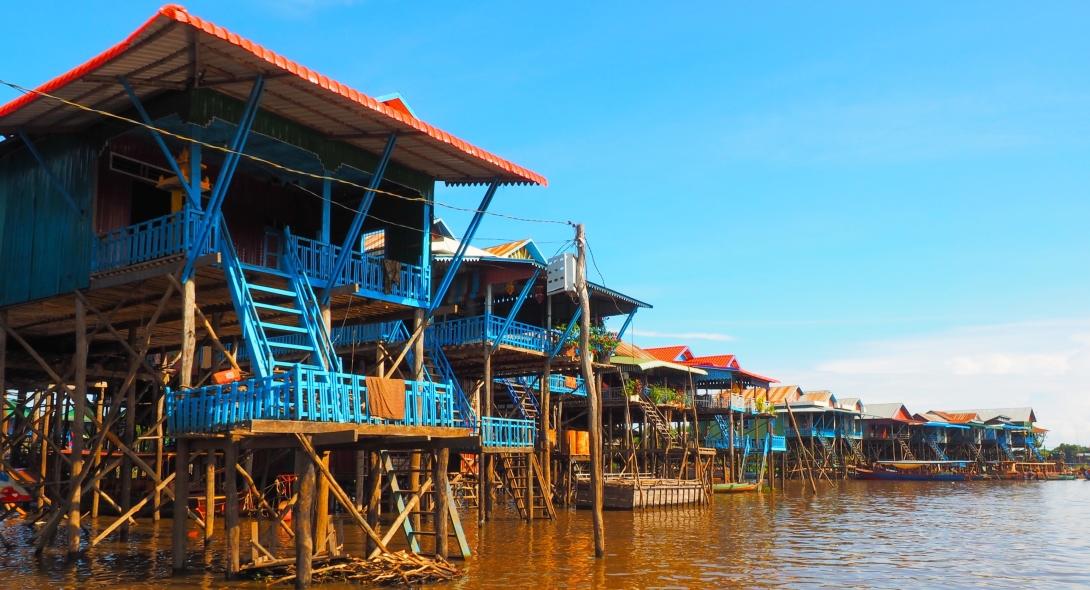 The following day we drove to Tonle Sap, taking a boat along the river, which had only just enough water for us to do so, passing houses on stilts standing high above us, and onto the huge, huge lake, land cannot be seen once you’ve reached the floating restaurants in the middle.

It was an action packed and fairly tiring weekend, but well worth it.

I was nearing the end of my time on the Public Health Project and had just one more week to complete before joining the Khmer Project. Having had a taste of travelling into the countryside I was really looking forward to being taken on an exclusive sight-seeing trip along the coast to Takeo Province, Battambang and the Oodong Mountains.

Check out the final part of Sara's story here soon!